Linda F. R. Omobien is an At Large member of Council. She was first elected in 2009 to a four-year term. Since that time, she has been re-elected three times. She is chair of the Health & Social Services Committee, vice chair of the Budget & Finance Committee, and serves on the Rules on Committee.

Prior to her service on Akron City Council, Omobien served on the Akron Board of Education for 16 years. She also had the distinct privilege of serving as the 2006 President of The Ohio School Boards Association’s (OSBA). During this time, she presided over the Board of Trustees and Executive Committee, as well as the Student Achievement Leadership Team (SALT) of which she was a charter member. This was the first time a board member from the Akron Board of Education and an urban board member from Northeast Ohio has ever served in this capacity. She chaired the Legislative Platform Committee and was a member of the Conference Planning Committee and Northeast Region Executive Committee. Her OSBA honors include several Awards of Achievement and the prestigious Master Board Member award which she earned in 2003.

Omobien also has an impressive record of service on the Akron City School Board. She was board president in 1999, 2003 and 2008. She was also Vice President in 1998, 2002, and 2007. She chaired the following committees: Instructional Policy and Student Achievement; Finance; Legislative and Accountability and Long-Range Planning. She also served as the district’s Student Achievement Liaison, and had been the OSBA Delegate Assembly representative and alternate. She also served on the Joint Board of Review which oversees the school district’s $800mil building project from 2003 to 2008. It was during Omobien’s 2003 presidency that the “Imagine Akron” levy was passed that authorized the City of Akron to use 0.25% of it’s Income Tax to fund the School District’s local share of 41% for the project. The State funded 59%.

Omobien also represented the board on the Summit Education Initiative’s Academic Standards Steering Committee and Partnership Steering Committee; served on committees that met with representatives of the International Baccalaureate Program and the National Science Foundation, and many others.

The veteran board member is active nationally, as well. She has attended the National School Boards Association’s (NSBA) Annual Conference nearly every year since she was elected to the Akron board. Additionally, she was invited by NSBA to participate in special group discussions, helped NSBA establish its legislative agenda and has attended Council of Urban Boards of Education (CUBE) conferences and participated in other CUBE events.  She also serves on the Federal Relations Network.

Omobien continues to serve in a very active role in the community. She is a member of the County of Summit Social Services Advisory Board; Summit County Progressive Democrats Board of Directors; The Federated Democratic Women of Summit County; and The ATHENA of Akron member. She served on the Emmanuel Christian Academy Board of Directors; Governor’s Reading and Literacy Commission; Delta Sigma Theta Sorority (Past President & former Financial Secretary); Women’s Network, Susan B. Anthony Level; Junior League of Akron (Current Sustainer); League of Women Voters; and is a life member of the NAACP. Past participation includes service on the United Way of Summit County Board of Directors; Leadership Akron Alumni Association Board of Trustees; Summit Federal Credit Union Board of Directors; Akron Community Foundation’s Women Endowment Fund Advisory Board; Western Reserve Girl Scout Council Nominating Committee; and The YWCA Nominating Committee.

Service has been a hallmark of her professional career, too. Omobien is a mental health administrator at Community Support Services, Inc. where she has worked for nearly 30 years. She also has her own consulting business, Omobien & Associates, Inc. Several years ago, she and a group of mental health professionals started The African American Counseling Team (AKA: Minority Behavioral Health Group) under Rev. Jeffrey Dennis’ leadership.

Omobien moved to Ohio in 1974 from Pascagoula, Miss. to seek employment opportunities, and found work and met the man who would become her husband, Edward O. Omobien, to whom she’s been married for 40 years. She earned her bachelor’s degree on May 19, 1974 from Alcorn State University, and her master’s degree from The University of Akron on May 28, 1988 in Community Counseling. She has almost completed doctorate at The University of Akron, as well. She is a Licensed Professional Clinical Counselor with supervision designation (LPCC-S), Licensed Independent Chemical Dependency Counselor with clinical supervisor endorsement (LICDC-CS), and a Licensed Social Worker (LSW). She also graduated from Leadership Akron in 1991. Linda F. R. Omobien is the sixth of seven children born to the late Booker T. W. Randall, Sr., and Florine Davis Randall. 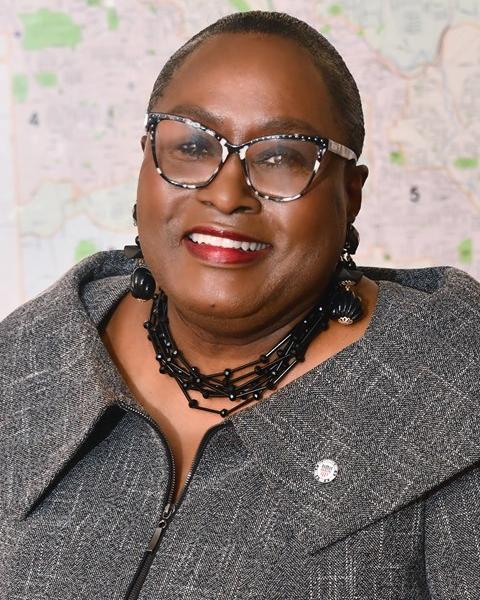